Each goal produced at MH Goals has been through rigorous internal and independent testing to meet both British and European safety standards. This ensures the goals you purchase from us are safe and completely fit for purpose, whether at a Premier League ground or at your local pitch.

Safety standards for football goals first came into existence in 1989 with BSEN748, which covered full size (24ft x 8ft) and 5m x 2m goals. Although this was a breakthrough for equipment safety BSEN748 didn’t cover smaller sized goals, so in 2004 BS8462 and BS8461 were created to encompass all goals that were 21ft x 7ft and under. The former covered the goal itself; including vertical and horizontal tip tests and maximum sizes for finger and head entrapment. The second standard, BS8461, was about the procurement, installation and maintenance of the goals. Both standards were revised in 2012 to include 16ft x 7ft 9v9 goals.

This brings us to the latest standard, BSEN16579, which came into effect in 2018, replacing 8462 and 8461. The old standards had run their course and although there was nothing inherently dangerous about goals being made to that standard, both a re-think and evaluation of the old standard were overdue. The new standard includes more stringent testing for finger entrapment, head and limb entrapment, vertical and horizontal tip tests and shear points. It also includes a new medium weight category for any goal over 10kg but under 42kg, which has its own set of test requirements.

How our goals are tested

All MH Goals sports equipment goes through two levels of testing – in-house throughout the design and prototype stage, and then independently by a UKAS and FA approved testing laboratory.

The testing equipment used is the same for both MH Goals and the laboratory, and takes the form of head, limb and finger probes, load cells for measuring Newton pressure and a specifically developed testing rig capable of withstanding high pressure loading for stability testing. Dozens of tests are conducted on our goals before any safety certificate is issued. 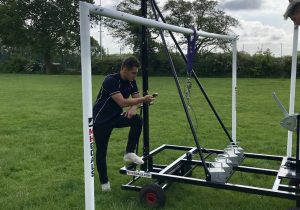 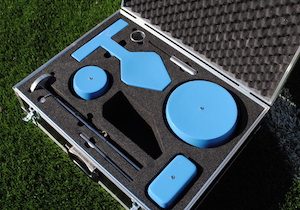 Our test rig is made from high grade steel and can apply over 3,000 Newton metres (N m) of pressure, which enables us to not only test each goal to the minimum weight required by BSEN16579, but to the goal’s actual breaking point. Attached to our test rig is the load cell – this accurately measures the pressure applied to any product using Newton meters as the unit of measurement. Each goal has a minimum target, for example a 12×6 mini soccer goal that is over 42kg in weight has to pass a strength and stability load of 1800 N m and 1100 N m which is the equivalent of 180kg and 110kg. The entrapment kit has a range of probes to test for finger, head and limb entrapment and is the same kit used by our preferred independent test house which ensures consistency throughout our testing.

New and updated tests for BESN16579 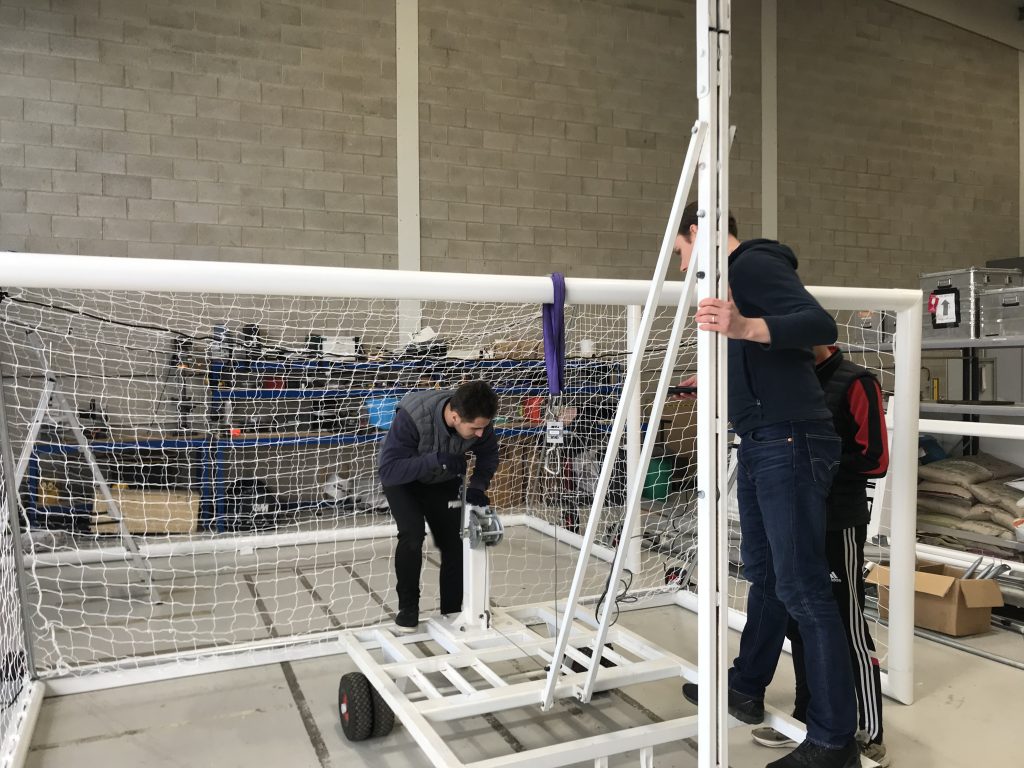 Testing the strength and stability of football goals isn’t new and was part of the very first standard (BSEN784), however this has now been updated in BSEN16579. The strength test is conducted by applying a weight vertically to the crossbar; for the stability test it is applied horizontally. In the previous standard all goals had to withstand a variable maximum load of between 800 N m – 1800 N m for the strength test and 700 N m – 1100 N m for stability. This has now been increased to 1800 N m and 1100 N m respectively for all goals over 42kg. 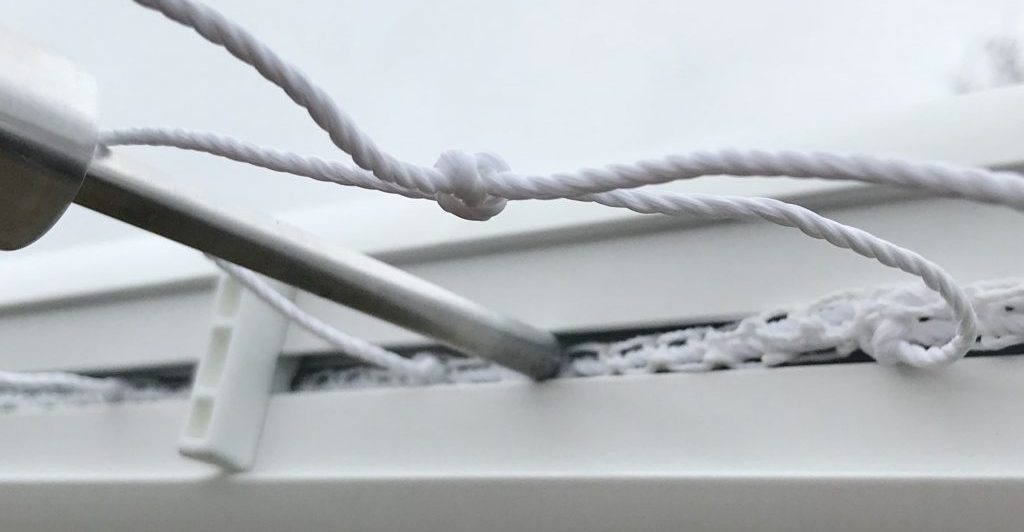 The finger entrapment test is designed to detect areas of a goal where fingers could become stuck. It uses an 8mm probe to replicate a child’s finger and is applied to all areas of the goal where this could be an issue. This includes the net rail channel on aluminium goals, all brackets and folding mechanisms on our lightweight range, and on our new Evolution lift and lower wheel. To pass this test the gap should either not allow the probe to pass through, or if the probe does enter the gap that gap should be over 25mm wide, thus not causing an entrapment issue. Any gap between these sizes is classed as a fail. 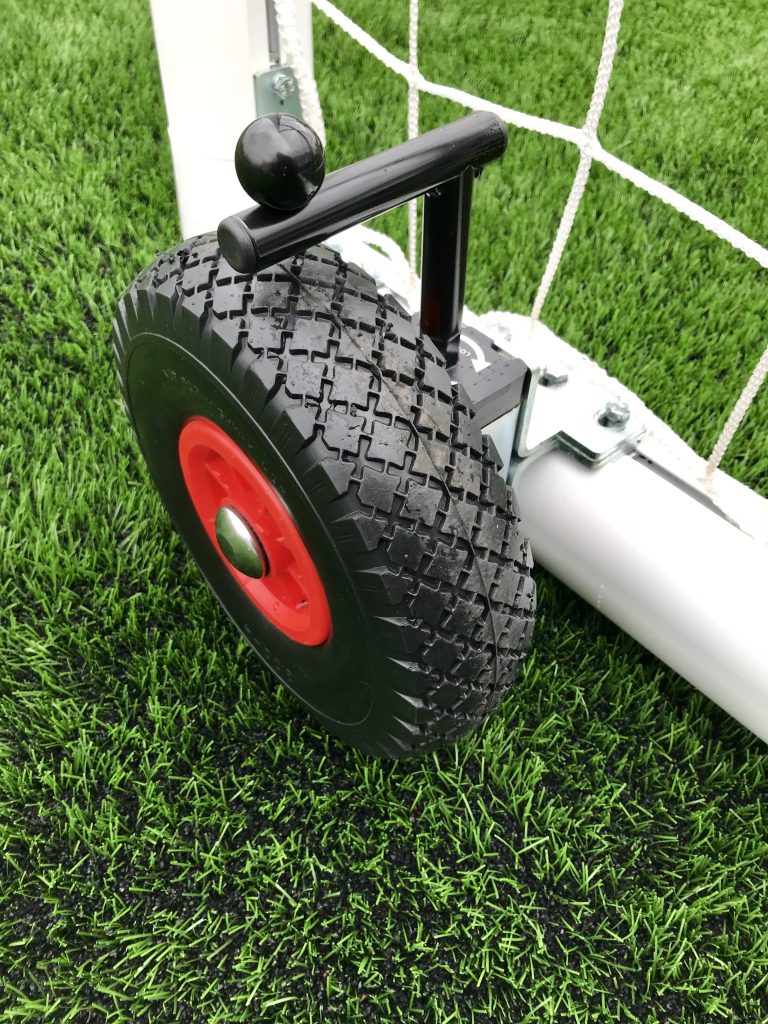 A new feature of the BSEN16579 standard is the inclusion of shear and crush point testing. Any area of the goal that could cause the user to sever or crush any part of the body is tested, including all wheels and folding mechanisms. The wheels for example, have required significant reworking, as the old lever mechanism created a shear point and the gaps between the brackets failed on finger entrapment. Our new Evolution wheel has addressed both of these issues and passes both internal and independent testing under BSEN16579. Another problem area was the folding brackets, which created a crush point when the goals were folded, and a finger entrapment issue between the fixing plate and folding mechanism. A new extended folding bracket has removed both of these issues by increasing the gap to over 25mm between plates, and the inclusion of a stop on both the top and bottom brackets to prevent the folding frame resting on the crossbar. 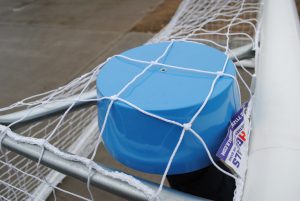 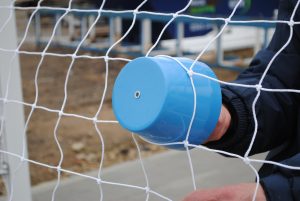 The new standard has also updated the head and limb entrapment test, which covers any gap large enough to fit a normal sized head or limb, including the goal nets. A range of probes is used to simulate a child’s head or limb with all areas of the goals being tested, including the space between braces, net supports and lifting handles. The probe should be able to pass cleanly through the gap.

A football net covers the largest area on any goal and even in Premier League matches it’s not uncommon to see players entering the goalmouth at speed and colliding with the net. For this reason each net – and the net attachments – must pass a range of unique tests that cover strength, breaking strain and maximum mesh size.

The strength and breaking strain is tested by attaching a large circular disc to the net and applying 800 N m of horizontal of pressure to the net. The net should not break or show any signs of tearing; the net hooks should also remain in place and show no signs of failure. The mesh size has also been reduced from 120mm to 100mm to lessen the chance of head entrapment; this is tested using a probe that shouldn’t be able to pass all the way through the net even when fully stretched.

Mediumweight and Lightweight goals under 42kg 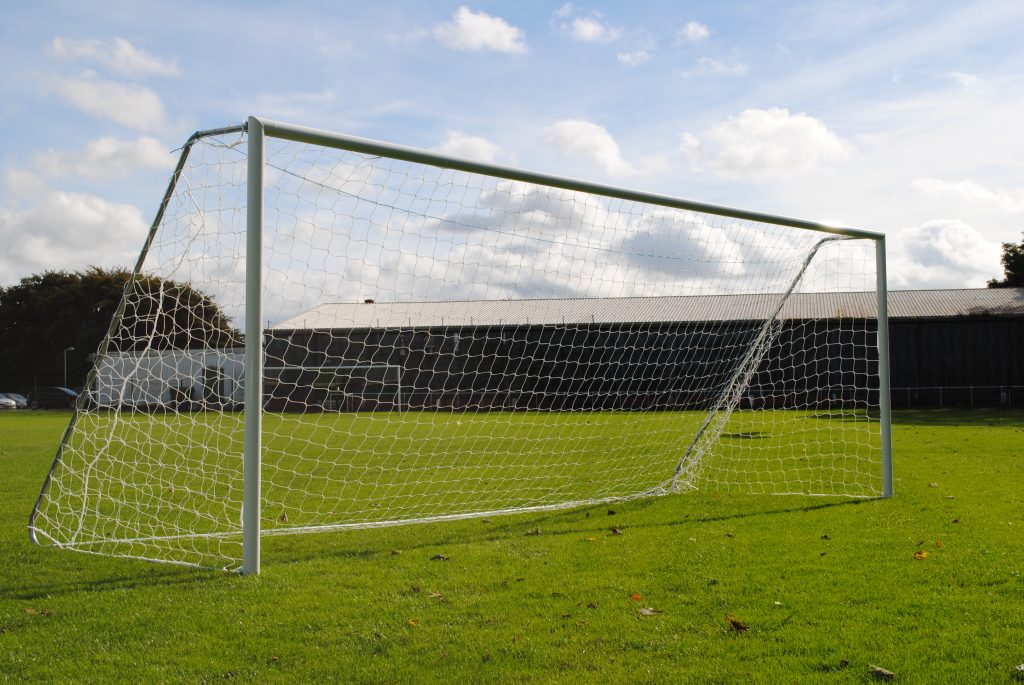 The new BSEN16579 standard also introduces specific tests for goals over 10kg, but less than 42kg. The head, limb, finger, crush and shear points tests are still the same as for goals over 42kg but due to their reduced weight the strength and stability are lowered to 1000 N m and 700 N m respectively.

This new classification highlights that these goals are lighter in weight and less likely to cause injury; this also means that for the first time both a mediumweight 21ft x 7ft and 24ft x 8ft goal can be manufactured that pass BSEN16579.